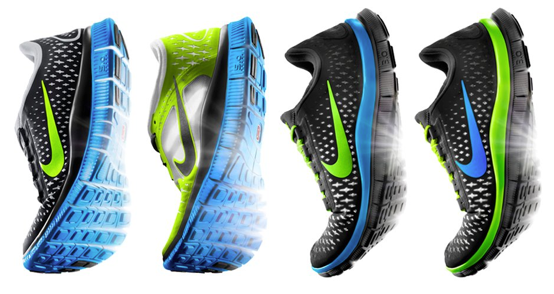 Regardless, marketing would be justified in describing its relationship to us and ours to it, under the ever-curious status of its complicated.

Old school marketing was simple – TV, print and radio. It was a one-way conversation and marketers did all the talking, consumers were forced to listen. Not exactly enjoyable. Now, the world of marketing has gone digital and it is complicated. There are countless mediums, clutter doesn’t even begin to describe what we’ve got going on, but the consumer has the power back – it’s a two-way conversation and the consumers don’t always have to listen. They can choose not to engage, they have the ability to turn messages on and off. It doesn’t take an ill-written relationship book aimed at women 18 to 45 to let us know it’s always good to have the other person like you just a little bit (or a lot) more than you like them. Well, marketing we know you like us a whole lot. But the problem is we’re tired of being treated the same as every other man and woman you’re in a relationship with, and Twisted Sister said it most eloquently, we’re not gonna take it.

Due largely to the fragmentation of audiences that has occurred in recent years, grouping audience members into “segments” based on similarities is dying, and the future is audiences of one. Amazon has been doing it right for quite some time, log in and you will see a plethora of items that are special to you, your tastes, suggestions on what you might like etc. It didn’t start that way, Amazon didn’t know my likes and dislikes the first time I visited, but it didn’t take long. That Amazon is a quick study. Take notes – the future of marketing relies on your ability as a brand, company, product, service or agency to comprehend relationships  – more specifically that special relationship your marketing has with its target audience. It’s a slow meaningful relationship that you will have to cultivate, it might start with a nice dinner and a flick – but by its peak you should be enjoying mimosas mid-morning on the beach…. and it doesn’t have to be complicated.

That second time I came back I learned that Amazon cares, kind of like that good friend who is always sending you things they think you’ll like, like cute mittens on Etsy because they know you’ve got a thing for knitted goods. Anyway in this way Amazon rocks, and the rest of the marketing world needs to follow suit – giving each customer or prospect the personalized individual treatment the world today has led them to demand. As an article I read recently pointed out, this is the way to turn visitors into “long-term, high-value customers at very high rates”.  Amazon has nailed it – the more items I buy from Amazon the better they get to know me and the more accurate the suggestions are – it’s a never ending cycle of awesome. We all know the feeling of ordering to go from your favorite lunch spot, where your usual waitress hands you a “to go” bag, contents: 1 Cobb Salad, diced turkey not cubed, dressing on the side, romaine not iceberg lettuce, no tomatoes, no onions, and a chocolate chip cookie – perfect, throw in a white chocolate chip cookie because she knows you like chocolate chip and thought you might like white chocolate chip too, well you just might have to marry the waitress. Well Amazon has bottled this feeling up and they’re selling it – and I’ll tell you what we can’t get enough….some even predict Amazon will be the place people go to search for things first, over Google in the future.
Personalized service has been around for years, the value has never ceased, but with the advent of 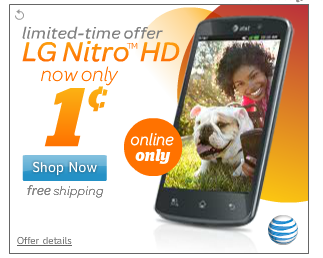 technology and the increase in fragmentation – many of us have failed to see the value in employing this method in the digital sphere. One of the more compelling ways online advertisers are doing this is through dynamic creative in banner advertising.For example AT&T, may use an ad like the one to the right to retarget a user who searched on the product featured and offer free shipping to entice the user to return.The incentive paired with highly relevant content is a recipe for success.

In the future, we will be able to apply the same rules to other media. Think dynamic TV commercials – two viewers watching the same show on TV, one is a 45-year-old female, the other is a 22-year-old male. When the commercials come on the 45-year-old is shown an ad for Olay anti-aging facial products and the 22-year-old male is shown an ad for Axe products. The commercial will be specialized to the viewer and thus, more relevant. Personalization = success. It’s simple, write it down. The big picture here is this – the future is audiences of one, no matter your medium.