As the 2022 midterm elections come to an end, we wanted to highlight the most important political advertising takeaways from this year. Feel free to read our insights below or download our infographic for a summarized version.

KEY TAKEAWAY #1: POLITICAL ADVERTISERS MADE AS STRATEGIC OF A PUSH AS POSSIBLE ON ELECTION DAY

Drama-packed midterms led to a sharp political ad uptick in last-minute strategic ad optimizations. Digiday interviewed Simpli.fi’s CEO, Frost Prioleau for his thoughts on political advertising around Election Day. “Political advertisers are running and changing at a very high velocity,” Prioleau said. “They have a campaign, they want to get the campaign live very quickly, they may run it, they may change their mind three days later and say ‘take it down, swap out the creative,’ and come back.” 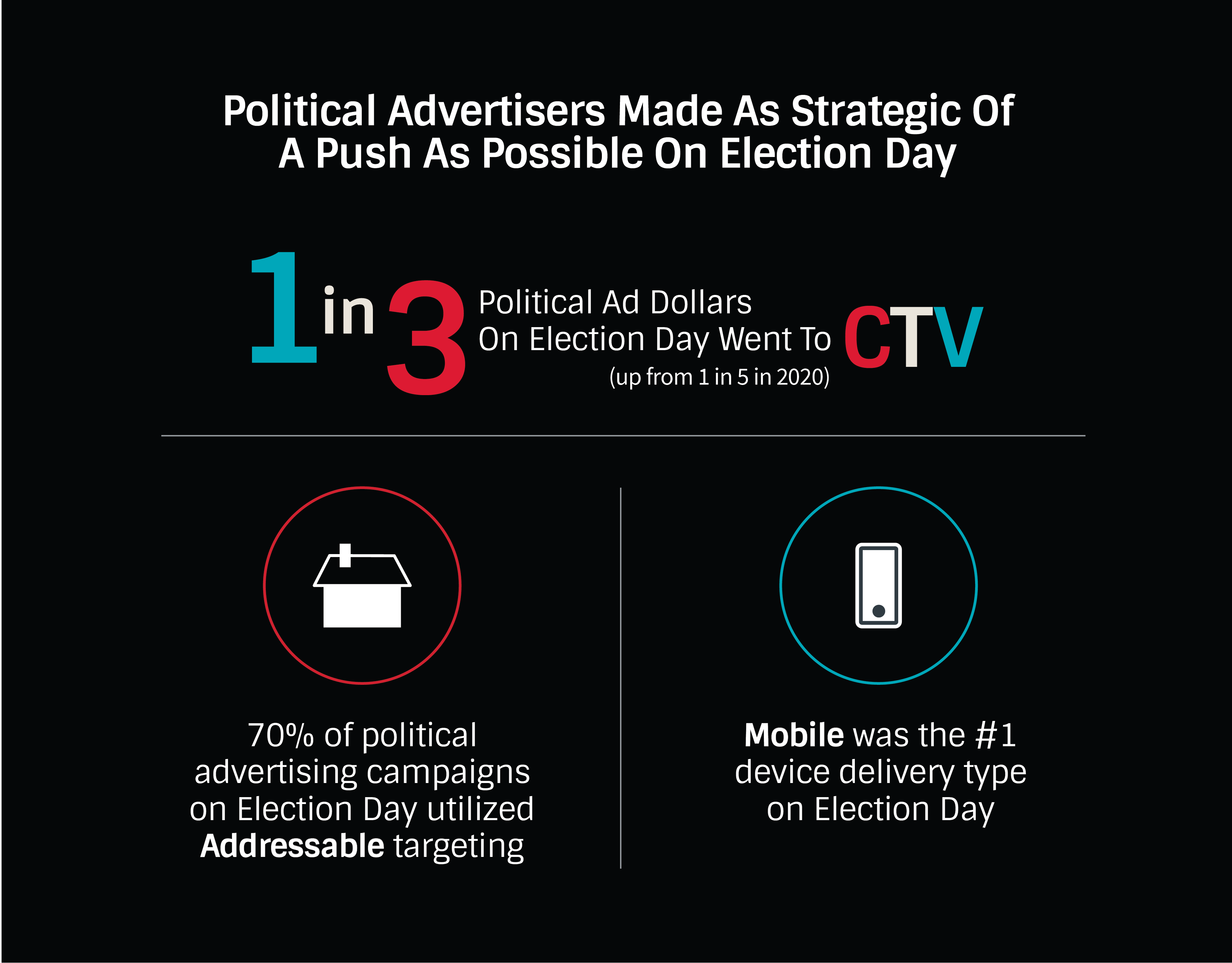 The increased investment in CTV, continued use of addressable, and dedicated mobile activation strategies proved successful for our political advertisers. It also highlighted the growth of CTV, the need for addressable, and the agility of mobile. As these advertisers fought to get in front of key voters all the way up to the polls, they made use of Simpli.fi’s solutions to do so effectively and efficiently.

KEY TAKEAWAY #2: POLITICAL ADVERTISERS DEDICATED MORE OF THEIR ADVERTISING BUDGETS TO CTV THIS SEASON THAN EVER BEFORE

AdImpact projected CTV to account for $1.44B of the record $9.7B spent on political advertising in 2022. Simpli.fi saw that meteoric rise on our platform when it came to the growth in political CTV. This year, political advertisers spent nearly 4 times more dollars on CTV compared to the 2020 presidential election cycle. Additionally, the average order size more than doubled for political CTV campaigns. 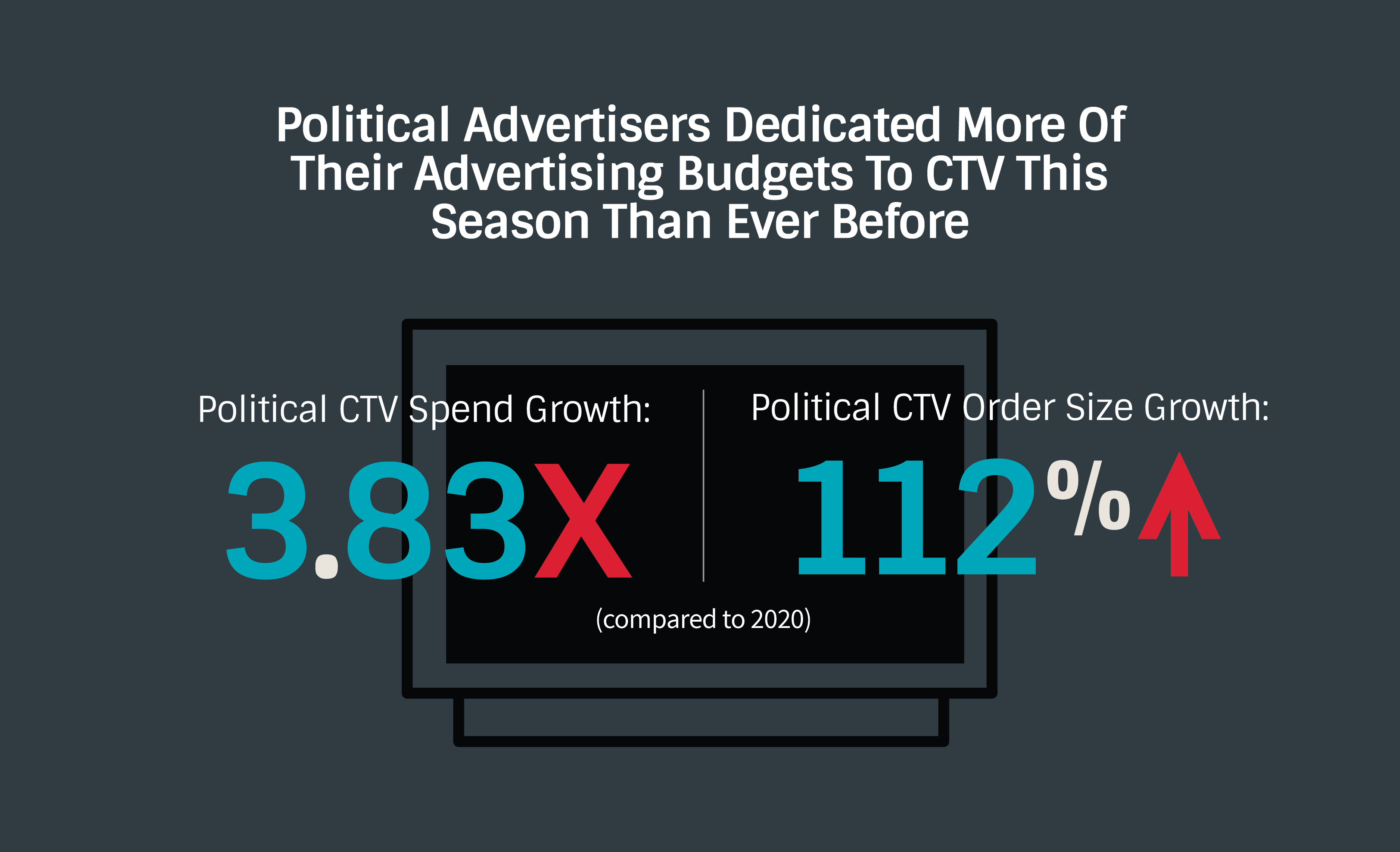 As records were set nationwide with political CTV investment, Simpli.fi saw the same impact. Not only did political advertisers run more CTV campaigns, but the size of those campaigns was much larger than ever before. That’s largely due to the increasing number of streaming households in America.

KEY TAKEAWAY #3: POLITICAL ADVERTISERS UTILIZED ADDRESSABLE SOLUTIONS THIS CYCLE MORE THAN EVER BEFORE

Earlier this year, Simpli.fi released a data onboarding guide exclusively for political advertisers. The guide detailed our core benefits offered, including an emphasis on our 90%+ match rate for addressable list uploads. With this solution, we saw political advertisers leverage household-level targeting like never before. 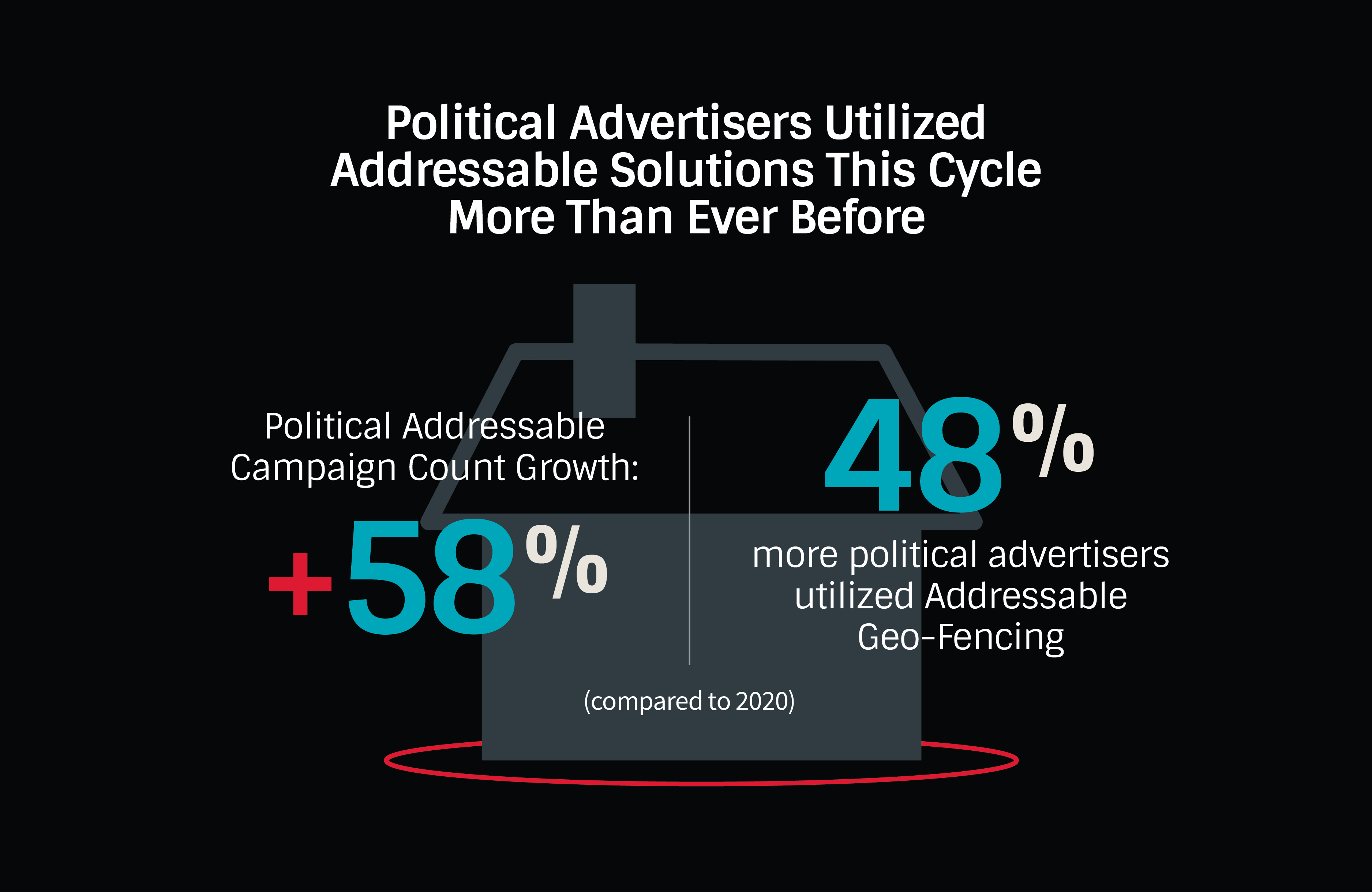 On the Simpli.fi platform, the number of political addressable campaigns increased by 58% compared to 2020. Additionally, 45% more political advertisers utilized Addressable Geo-Fencing during the 2022 midterm election cycle. An extension of our addressable solutions that makes this option so popular is our speed-to-market. Simpli.fi offers single-day uploads and activations for addressable campaigns. Paired with our dedicated political service team, we offer precise household-level targeting on a national scale with a 24-hour upload and activation window.

KEY TAKEAWAY #4: POLITICAL ADVERTISERS COMBINED THE POWERS OF ADDRESSABLE & CTV MORE THAN EVER BEFORE

Addressable and CTV solutions have dominated the advertising industry for years now. When paired together, they provide a highly targeted, highly scalable solution for political advertisers. On the Simpli.fi platform, we saw more leveraging of political addressable CTV advertising than ever before this year. 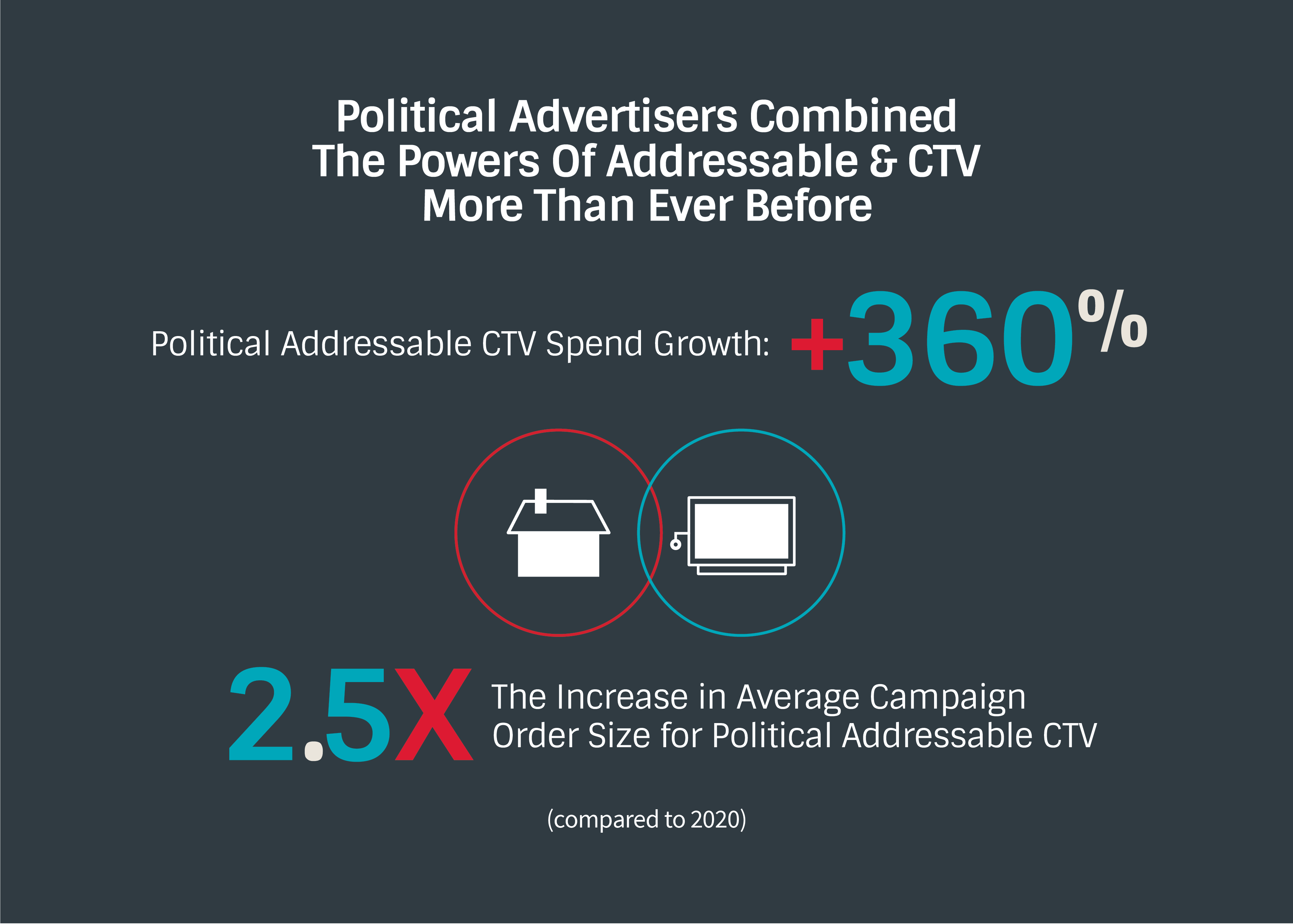 THAT’S A WRAP: CLOSING THE BOOKS ON 2022 & LOOKING AHEAD TO POLITICAL ADVERTISING IN 2023 & BEYOND

There you have it, another major election cycle in the books. We’re grateful for our political advertising partners who invested in our solutions for their candidates and causes. As we look ahead to 2023 and beyond, we expect continued investment in addressable, CTV, and mobile in the years to come.

If you’re a political advertiser, we’d love to hear from you. What strategies worked best for you in 2022? And what do you hope to see more of in the future to help you make the most of your political advertising efforts?

Ready to Work With The Leader in Political Advertising?
Fill out the form below, contact your Simpli.fi representative, or email us at hi@simpli.fi for next steps.