As we get closer to the 2020 election, political advertisers are looking for ways to reach the right voter audiences with precision and scale. Using Simpli.fi’s Addressable Geo-Fencing and Addressable Audience Curation solutions, a super PAC was able to target more voters by shifting budget quickly from state to state to align with voting days. Check out the full case study below for the details.

U.S. political advertising spend in 2020 will exceed $6 billion, with approximately 20% of that allocated to digital (eMarketer). As political ad spending continues to grow, political marketers are increasingly turning to digital advertising to granularly target more voters at a lower cost than traditional advertising. In 2020, a newly-formed super PAC sought to build awareness for their candidate and encourage Democratic Party members to vote in the primaries. They focused on maximizing reach to registered Democrats using pre-roll video ads in the days leading up to Super Tuesday.

Simpli.fi and the super PAC developed a plan that allowed for budgets to be shifted quickly from state to state to align with voting days. Due to the fast-paced nature of primary campaign voting schedules, the super PAC relied on Simpli.fi’s ability to quickly ramp up and down state by state. Simpli.fi and the advertiser worked together to develop a strategy that would target Democratic voters in a timely manner and encourage voters to support the presidential candidate.

The super PAC focused on seven states that were vital to the candidate’s bid. This included five that held elections on Super Tuesday, and two more that had primaries within the previous two weeks. In order to build a relevant audience for targeting, the advertiser used Simpli.fi’s Addressable Audience Curation tool. This allowed them to custom-curate an addressable audience based on location data and over 500 demographic variables in real-time within the Simpli.fi UI. The custom audience contained two groups of voters across all seven states: (1) adults 40+ who are Democrats and (2) women Democrats aged 30+.

With the curated audience of 1.59 million households, the Simpli.fi platform built target zones around each individual address with Addressable Geo-Fencing. GPS data paired with plat lines matched each address to the exact physical location, shape, and size of the property. The system then automatically built a geo-fence target zone around each property for targeting the individual households with pre-roll video ads across desktop, tablet, and mobile devices.

Creating a flexible, rotating budget schedule was key to the success of the campaign. It was important to target voters in the days and hours leading up to local voting dates. Simpli.fi followed the primary election calendar to target individuals in each state at the optimal time. The strategy and timing of the campaign proved to be highly effective in reaching millions of voters.

Simpli.fi’s granular reporting provided a breakdown of spend, reach, and numerous other performance metrics down to the Zip+4 level. Overall, the campaign outperformed its goals with a Click Through Rate (CTR) of .11% and a Video Completion Rate (VCR) of 57.6%. 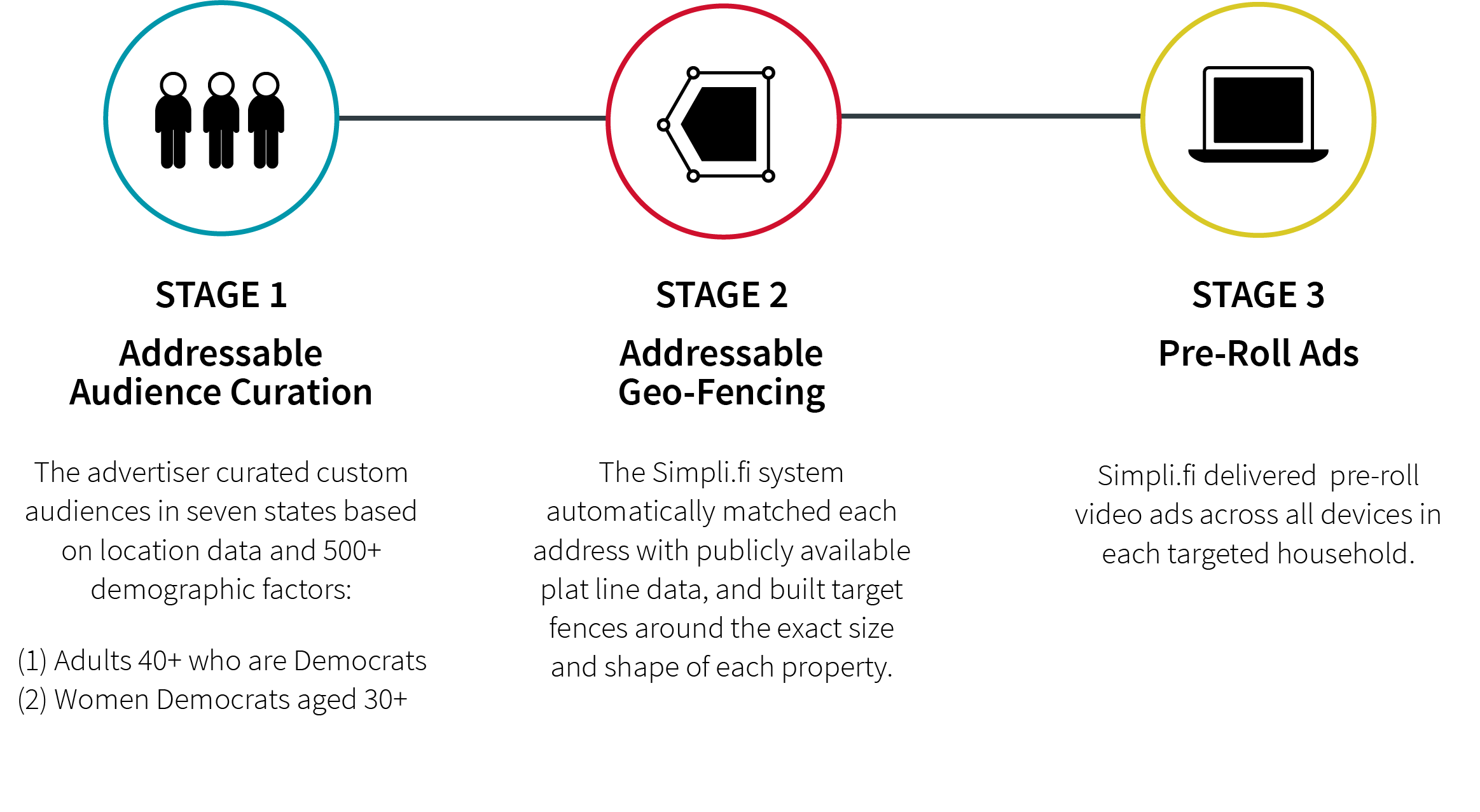 Interested in augmenting your political advertising with Simpli.fi’s powerful audience targeting solutions? Get in touch at hi@simpli.fi or contact your Simpli.fi representative.