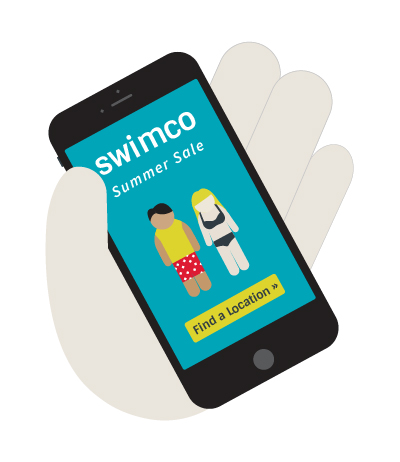 Nomenclature, local preferences, and buying habits vary from city to city across the country. Because of this, brands with numerous physical locations often find it difficult to successfully target their advertising campaigns with highly localized audiences. It is a challenge to reach a precise audience in multiple geographic areas and to stand out from the competition in a crowded marketplace, let alone increase foot traffic to their locations.

Fortunately, multi-location brick-and-mortar retail stores are uniquely positioned to take advantage of geo-fencing technology. In addition to the ability to target geographic areas with high concentrations of the target market, they can measure the increase in foot traffic to their stores that is attributable to the advertising campaign.

Swimco fits this exact bill. As the leading swimwear retailer in Canada, they were looking to effectively reach their target audience and increase foot traffic into their stores in the months leading up to summer. They enlisted their marketing agency, Bloom, and Simpli.fi to take advantage of geo-fencing technology to precisely target swimwear shoppers and track online-to-offline conversions.

The goal was to increase physical foot traffic to over 20 Swimco store locations across Canada, gauged via Simpli.fi’s Geo-Conversion Lift metrics.

Swimco, Bloom, and Simpli.fi knew that the key to success would be relying on precise geo-fence targeting that had granular localization capabilities, and the ability to measure and optimize online-to-offline conversions. Together, they developed a strategy to reach swimwear shoppers by focusing on locations related to swimming and retail. First, the team built geo-fence target zones around four categories of locations:

With Simpli.fi’s custom-shaped geo-fences, the campaign was hyper-focused only on these relevant locations. This ensured that ads would be served to users who visited these sites, so impressions were not wasted on areas outside of the targeting zones. Further, by grouping the target zones into these categories, Swimco, Bloom and Simpli.fi could determine the impact that each category had on the overall campaign performance.

With the target zones in place, attention shifted to the conversion side of the campaign. The team drew conversion zones around more than 20 Swimco stores across Canada to track the number of users who visited a target zone, were delivered an ad, and then entered a conversion zone.

Simpli.fi’s extensive reporting capabilities provided insight into results at the level of each target zone and conversion zone, allowing Bloom and Swimco to gauge the relative success of each geo-fence in real time. Further, the advertisers could optimize the campaign midflight by shifting spend to the highest performing geo-fences, therefore driving more qualified buyers into their stores.

Over the course of the five-month campaign, Simpli.fi and Bloom helped deliver an increase in foot traffic to the Swimco stores. Using Simpli.fi’s Geo-Conversion Lift metrics, Swimco measured a 43.6% surge in incremental store visits from the targeted locations. This increase reflects the percentage difference between users who visited a conversion zone after being delivered an ad and those who naturally visited a conversion zone without being delivered an ad after being seen in a target zone.

Geo-Conversion Lift also revealed that the campaign drove an average of 40 new campaign converters to each store per month. New campaign converters are converters who have not visited a store in the last 30 days, allowing Simpli.fi to filter out repeat visitors such as employees, vendors, service providers, and even the mailman.

The advertisers were also able to measure additional conversion metrics such as Cost Per Visit for each store. Further, Bloom and Swimco discovered valuable insights about which target zones were driving traffic to which conversion zones, which can help guide additional marketing efforts.

Interested in adding Geo-Fencing with Conversion Zones to your next campaign?
Email us at hi@simpli.fi or contact your Simpli.fi Representative.