Advertisers wanting to target music fans and festivalgoers need look no further than an event like Lollapalooza. This music festival presented an ideal opportunity to showcase Simpli.fi’s Event Targeting technology, since it brought together a cross section of attendees with similar interests and pursuits- specifically, music lovers and those interested in outdoor music festivals.

Lollapalooza 2018 was a four day event with 180 acts and over 400,000 attendees. Unlike years past, festivalgoers did not have to battle any storms, though they did have to contend with some Chicago heat that reached the upper 90’s on Day Three. Bruno Mars and St. Vincent both put on show-stopping performances, and hip-hop “reigned supreme” as the most well-represented genre across all shows at the festival.

For this event, Simpli.fi geo-fenced four stages during the headline performances of all four days. We also set-up hourly fences of the entire park spanning 11 AM to 10 PM for each day to see if we could detect any trends or patterns in foot traffic based on mobile users. By geo-fencing these specific times and locations, we analyzed foot traffic across each day and time, and broke down the data by headliner, genre, artist, and stage. Our analysis yielded several actionable findings.

Would You Believe That the First Half of the Festival Outdid the Second?

Our data showed that weekday performances actually trumped the weekend shows in terms of foot traffic. Days 1 and 2 saw significantly more foot traffic than Days 3 and 4, with a 26% increase for Days 1 and 2 combined as compared to Days 3 and 4 combined. According to WGN Radio, the heaviest trafficked day of the entire festival was Day 2 with over 110,000 attendees. 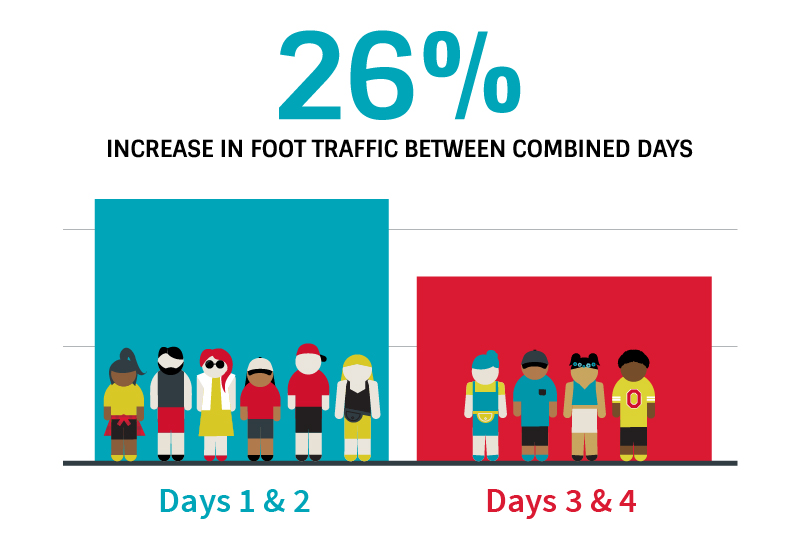 It is also worth noting that foot traffic peaked in the 2 PM to 4 PM timeframe for all four days in spite of that being one of the hottest times of the day, comprising 17% of the total traffic for all hours fenced with a 15% increase over the average amount of foot traffic across all hours. Performers during this time frame included Terror Junior, Parquet Courts, Arizona, and The Vaccines, and more.

While the Hip-hop and Indie genres were the most represented in terms of total headliner acts across the weekend (four each), the Indie genre headliners stole the show and had the most foot traffic based on mobile users over the course of the festival, resulting in a 123% increase in foot traffic as compared to the hip-hop headliners. 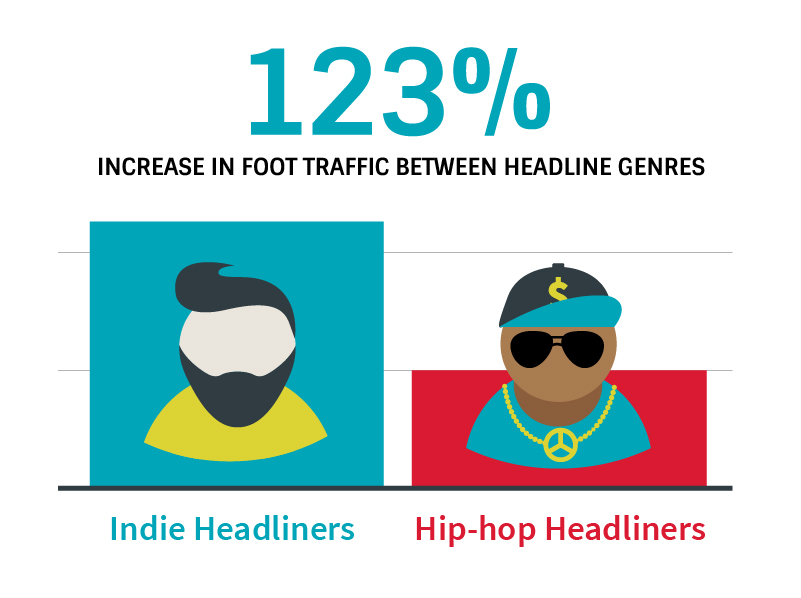 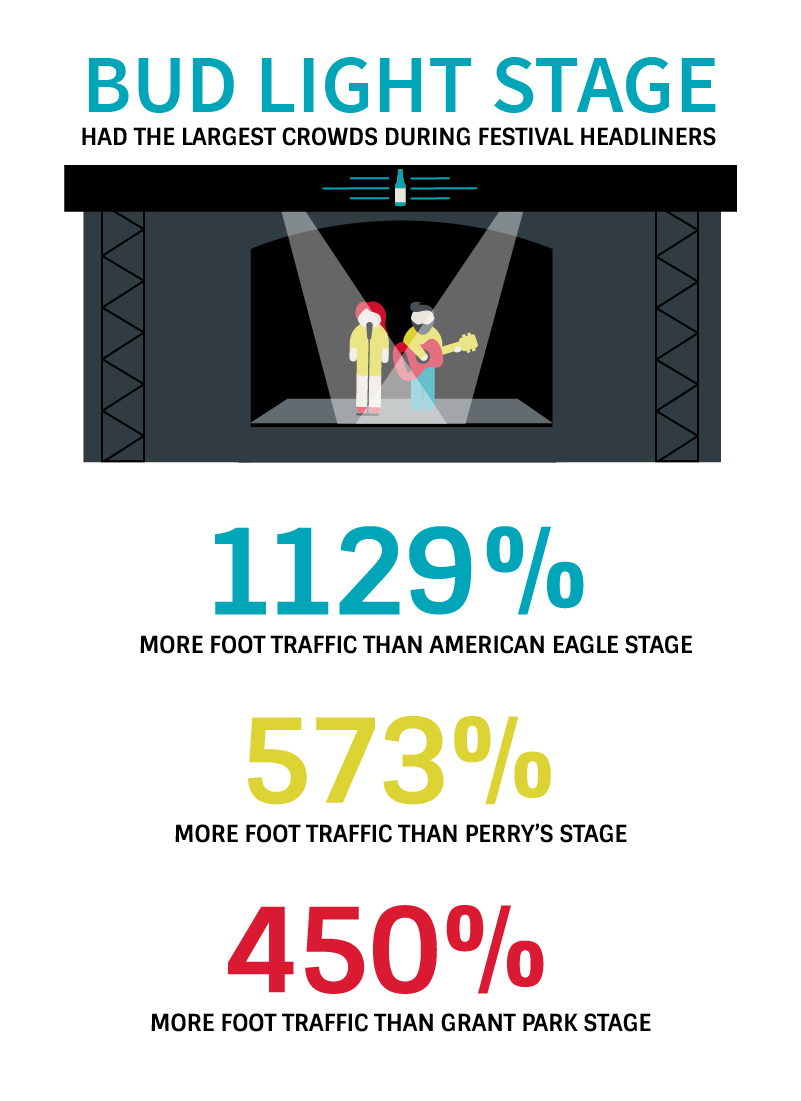 The popularity of the Bud Light stage could provide some insight into what was motivating foot traffic based on mobile users. Besides being the biggest stage, it also offered an extravagant VIP experience with special perks and prizes.

It’s worth noting that despite experiencing significantly less traffic than the other stages during most of the festival, the Grant Park stage saw the second highest amount of total traffic on Day 4 during Jack White’s performance, resulting in a 129% increase in foot traffic as compared to the average foot traffic of other headliners over the entire weekend.

Luckily for advertisers, Lollapalooza is only one of many large music festivals to target. Outside Lands, Hot 100 Fest, and Afropunk Fest are all upcoming music festivals that will be great opportunities to Geo-Fence.

Simpli.fi’s Event Targeting lets advertisers build a dynamic audience of likeminded individuals based on a specific location and timeframe. Even better, digital ads can then be delivered to these individuals up to 30 days after the event.

It’s the perfect targeting opportunity for advertisers to identify events that align with their goals, and to employ a localized programmatic platform to build a customized, portable audience – reaching people who have already expressed interest in their product or service at a granular level.

Lollapalooza 2018 may be over, but the opportunity to utilize our Event Targeting technology isn’t. Let’s talk! Reach out to your Simpli.fi Account Rep or email us at hi@simpli.fi to learn more.