One of the coolest things about programmatic advertising is that an advertiser’s ads follow users based on intent. These users see ads as they surf what I like to call “the rest of the internet” basically, those sites not everyone has heard of.

Rather than trying to pick and choose popular sites where you think your customers might be visiting, programmatic can show them ads no matter where they go.

Here’s a scenario that really shows the value of letting programmatic display serve your ads on sites you’ve never heard of.

“Mr. Advertiser, do you believe that upscale customers like smartphones?”
“Yes.”
“And would you imagine them maybe doing a search for “top 10 smartphones”?”
“Sure, that seems reasonable.”

Let’s do that search now. There are some paid ads at the top, but most people will scroll past those when they first start doing their research. 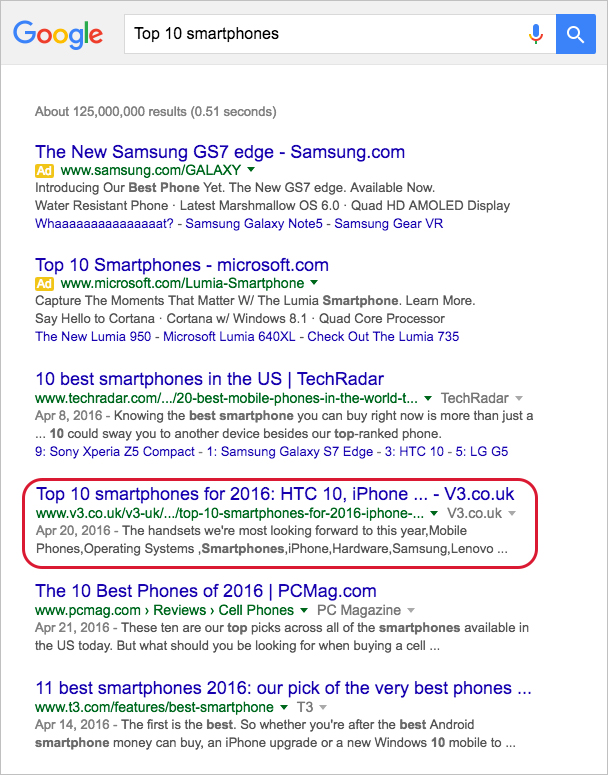 There are also some pretty popular sites like techradar.com and PCMag. Along with those, still very near the top of the results, you’ll see a site you probably have never seen before. It’s called V3.co.uk.

Let’s look at it.

Sure enough, it’s a pretty nice site. Lots of good content and articles. Very professional. Now tell me about the ads you’re seeing. Chances are very good that if you’ve done any recent online shopping or research, they are for something you’ve recently searched for or something that is targeted to you specifically. Personally, I’m seeing ads for hiking boots because that’s what I was shopping for yesterday.

If you had chosen to only advertise on popular sites you know, you would have missed this opportunity. An upscale customer, someone shopping for a nice smartphone, could easily find their way to this site. And if you’re trying to pick and choose the sites on which you advertise, you wouldn’t have chosen V3.co.uk and you would have missed the opportunity to reach this customer.

This is why it’s so important to let programmatic display target “the rest of the internet” – because it can follow the users wherever they go and isn’t limited to name brand sites like CNN. Not only that, an ad on V3.co.uk probably costs less, so you can get more impressions for the money.

As you surf the web later today, I challenge you to write down every website you visit. I think you’ll find that most of those aren’t sites that would be considered “popular” by everyone.

So, let programmatic display help you target the users, not the sites.