Outside of Thanksgiving, there might not be a more food-focused holiday than the day of the Big Game — and yes, it’s basically a holiday here in America. Despite all the halftime theatrics, the Puppy Bowl, and the game itself, the smorgasbord of dips and chips and every snack under the sun is still the star of any game day party.

But what does this food-fixated football ritual mean for grocers? How are consumer shopping habits affected, if at all, by this annual feeding frenzy? We were determined to find out, so we employed our state-of-the-art Geo-Fencing technology to record foot traffic activity among three retail grocers (upscale national grocer Whole Foods, large multipurpose retailer Walmart, and a more budget-friendly regional grocer) in three different markets (Atlanta, Minneapolis, and Seattle). We also compared traffic on the day of the Big Game to the previous Sunday and divided the day into three shopping windows: early (six to nine hours before the game), mid-day (three to six hours), and last-minute (zero to three hours).

The results of the study varied among cities, but some notable patterns emerged. In Minneapolis, site of the Big Game, Whole Foods saw an increase of 18% on game day, while regional chain Cub Foods saw a 22% spike. The Walmart stores we tracked saw a smaller increase of around 6%, but overall grocery store attendance was up significantly over the previous Sunday. The fact that Minneapolis played host to the event likely had a hand in that, with all the ensuing tourism and marketing surrounding the game injecting a palatable electricity throughout the Twin Cities.

Seattle also saw an overall increase on game day, with Whole Foods and Walmart surging upward 6% and 19%, respectively. Outlier Safeway decreased 12% at the stores we tracked, but in all, Seattle saw a combined week-over-week increase of 6%.

In Atlanta, however, game day attendance was actually down at all three grocers, including regional favorite Publix. In all, Whole Foods foot traffic decreased 15%, Walmart decreased 2%, and Publix decreased 7.5%. What’s to blame for this downturn? It could be any number of things. Perhaps they like to get their shopping done early in Atlanta. Maybe they were busy supporting their local NBA team, who also had a game that day. Or maybe they just took less of an interest in the Big Game this year after their team’s heartbreaking collapse in the 2017 championship game. Only Atlantans know for sure. 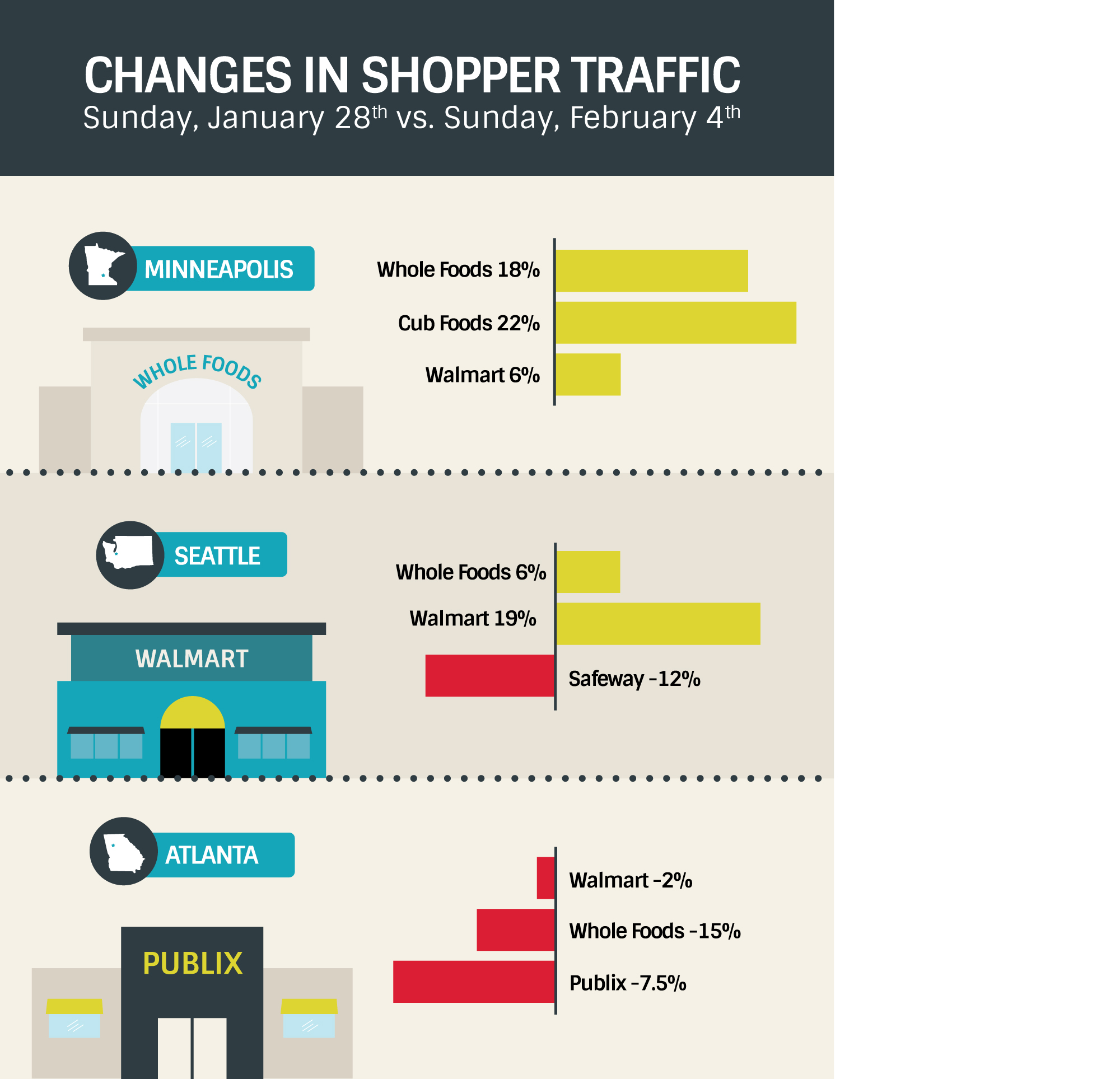 Of all the takeaways, though, the hourly breakdowns were the most noteworthy. In each of the three cities we tracked, peak shopping hours were in the mid-day window, or three to six hours before the game. This time frame generated a 32% increase in foot traffic over morning shopping and a 12% increase over last-minute shopping — as well as an increase of 15% over the previous Sunday’s mid-day window. The prior Sunday’s peak hours were in that last-minute bracket, indicating that the Big Game impacted behavior by influencing buyers to visit the grocery store earlier than usual — perhaps to grab their game day snacks on the way to their watch parties or just a few hours before. 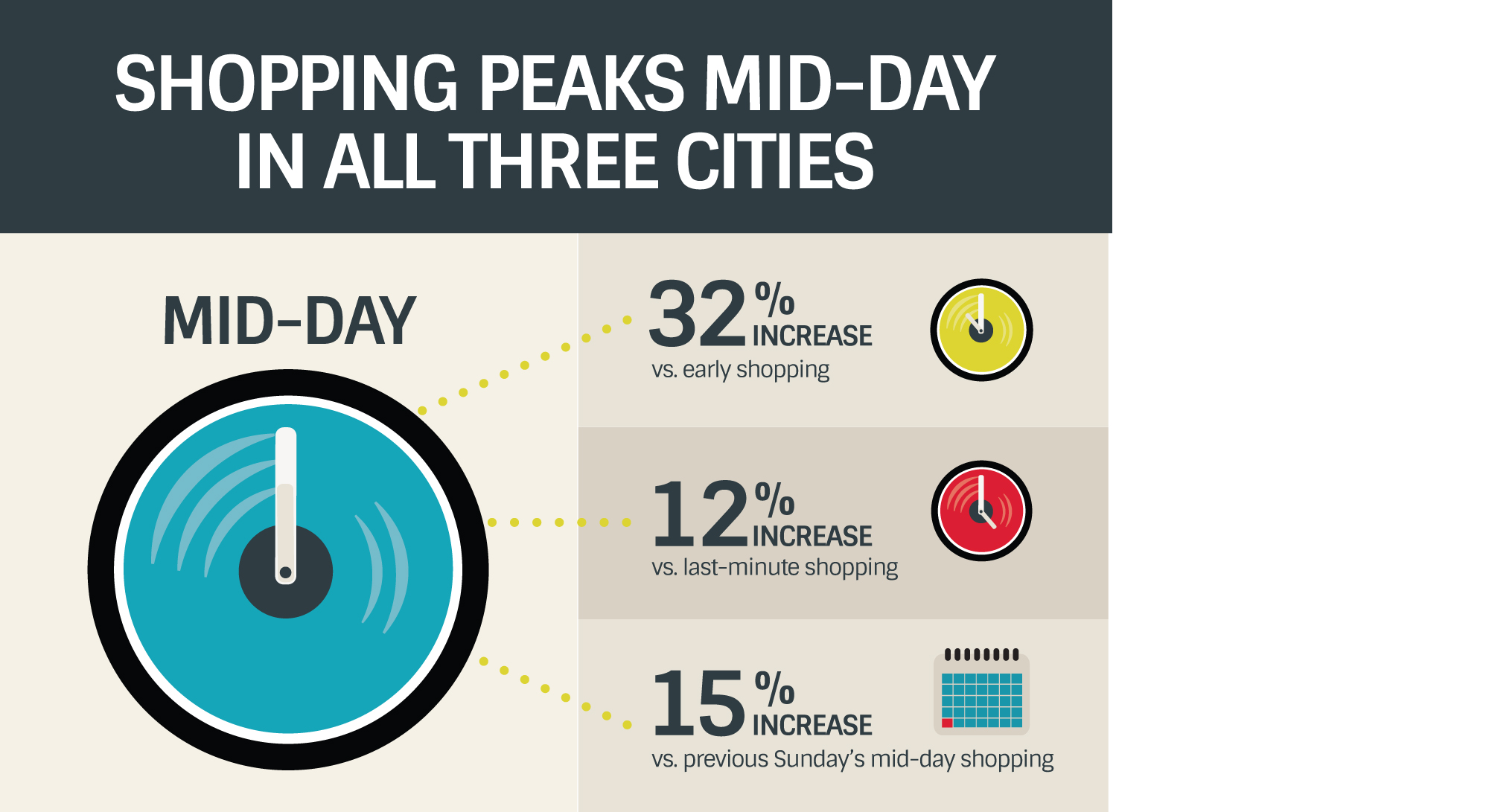 What does this mean in marketing terms? Well, for starters, Whole Foods won the day among these specific outlets, thanks in part to that aforementioned 18% increase in Minneapolis. It also demonstrates how unstructured data — recency and time of day in particular — can be crucial in building any successful programmatic campaign, especially for brick-and-mortar retailers.

Perhaps most importantly, this study — especially the variance between cities — is a prime example of the importance of localization, and why a national, one-size-fits-all approach to advertising generally isn’t a great idea. Buying habits and preferences will always vary by city — as illustrated by the avid shoppers in Minneapolis, and the less avid shoppers in Atlanta.

To unleash the power of localized marketing with our one-of-a-kind geo-fencing solutions, give us a shout at hi@simpli.fi.