Valentine’s Day is a celebration of the ones you love, whether it’s your significant other, family, friends, or even your pets. But if you’re like most Americans, it’s about the food you love too.

The National Retail Federation (NRF) projected almost $20 billion in Valentine’s Day spending this year, with a good chunk of that going toward a night out. And that got us thinking: Just how much busier do restaurants get on this dining-obsessed day? What types of food are we eating? How much are we spending? Are there any significant regional preferences?

To find out, we employed our state-of-the-art geo-fencing technology on a variety of restaurants in three different markets — New York City, Dallas, and San Diego — and compared Valentine’s Day foot traffic to that of the previous Wednesday. Dining establishments included restaurant chains Outback Steakhouse, P.F. Chang’s, and Olive Garden, as well as a handful of high-end local favorites — steakhouses, Asian-style restaurants, and Italian restaurants — for each market. We leveraged Yelp as a guide for price and style of cuisine.

Here’s what we found.

At the restaurants we tracked in each city, cumulative foot traffic increased on Valentine’s Day over the previous Wednesday, as couples clearly weren’t deterred by the prospect of a midweek night out. However it was surprising that chain restaurants increased by an average of 89%, while local restaurants increased by an average of only 39%. Each of the chains we measured fell within Yelp’s “Moderate” pricing bracket, while the local Italian and Asian options were “Pricey” and the local steakhouses “Ultra High-End,” so it could be that consumers weren’t as willing to splurge — at least not on dinner. 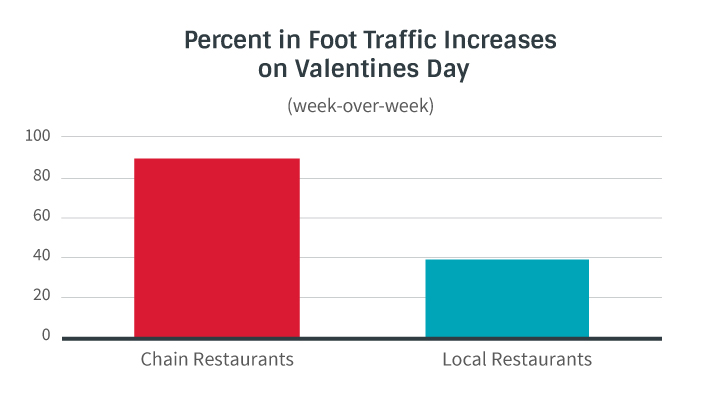 Which of these establishments performed the best overall? Out of the chain restaurants, Outback Steakhouse saw a 118% increase, and P.F. Chang’s wasn’t far behind at 114%. Olive Garden came in third, but still had a strong showing with a 54% increase across the three markets. 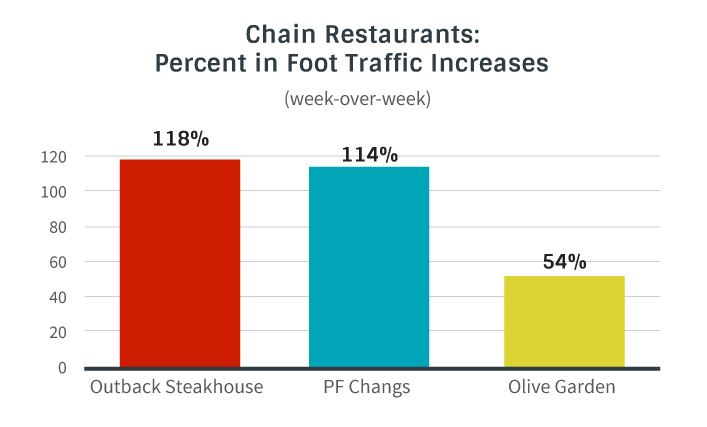 On the other hand, the local businesses we monitored saw mixed results, despite the net increase. The Asian-style restaurants, most of which were sushi-focused, were a favorite among valentines, seeing an 80% average lift in foot traffic. But local steakhouses actually saw a 10% decrease from the week before — and Italian restaurants didn’t fare much better, with a 7% decrease overall. 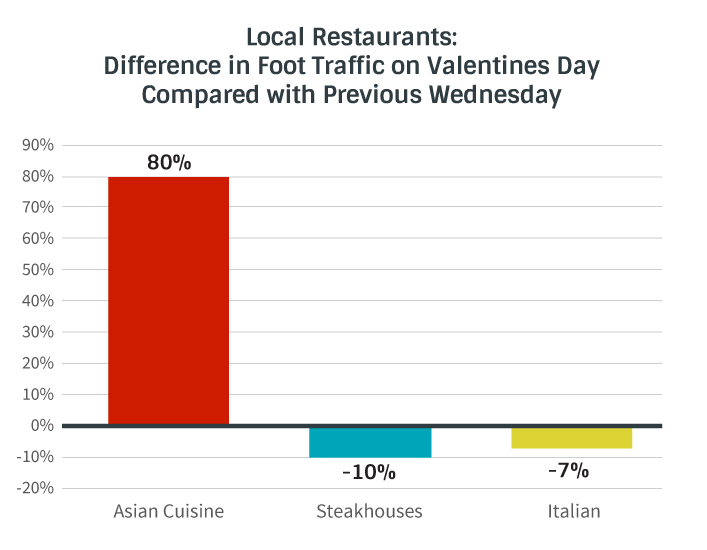 In New York City, steakhouses stayed about even week over week, bucking the downward trend in the other two markets. The local Asian-cuisine establishments had varying results: Brooklyn’s Tokyo-inspired restaurant Zenkichi saw a 226% increase, whereas one of the other restaurants we tracked, an Asian fusion fine-dining palace, saw a 24% decrease. But the big story out of the Big Apple was the success of the three chains, which increased an average of 166% in this particular market.

Chains in the Dallas area saw an uptick as well, with an average increase in foot traffic of 36% — including a 106% increase at the P.F. Chang’s in Arlington, a Dallas suburb. Local restaurants increased 53% overall, but largely because of a 350% increase at the upscale Pappas Bros Steakhouse, which offset a 20% decrease at the other local establishments we monitored.

San Diego, like its regional counterparts, saw a dramatic foot traffic increase at chain restaurants, which rose by an average of 82%. Local favorites increased 36%, thanks in large part to an 84% surge at Italian staple Old Trieste. And San Diegans were especially in the mood for Asian cuisine, as P.F. Chang’s and local offerings from Sushi Ota and Taka averaged an increase in foot traffic of 78%.

What does this mean for restaurants?

As is always the case, local nuances are the norm and should be considered while implementing a marketing strategy. Foot traffic behavior can also vary drastically based on the city, and individual preferences, including consumption habits, will always differ from market to market. Because of this, all advertisers can benefit from a digital strategy that utilizes geo-location and other targeting tactics to create dynamic audiences and optimize campaigns, messaging, and creative on the local level. Fortunately for them, that’s our specialty.

To learn more about Simpli.fi’s geo-fencing and event targeting solutions, give us a shout at hi@simpli.fi.