There are over 97 million homes in the United States with a connected TV device and that number is growing every year (Interactive Advertising Bureau). As the shift of media consumption continues, advertisers are increasingly eager to allocate budgets to OTT/CTV strategies. Recently, a national flooring company worked directly with Simpli.fi to tap into the power of highly targeted OTT/CTV advertising.

The brand sought to mirror their traditional TV campaigns using OTT/CTV advertising strategies. Ultimately, the advertiser wanted to increase online signups for flooring consultation appointments. Simpli.fi and the brand worked together to plan and execute a month-long campaign spanning hundreds of cities in seven states.

After considering many options for an OTT/CTV advertising partner, the brand ultimately chose Simpli.fi for the ability to create a custom audience, target at the household-level, and attribute online conversions. Using Simpli.fi’s Addressable OTT/CTV solution allowed the brand to reach a custom audience of specific households, rather than targeting broadly at the DMA-level, and still achieve the large-screen video impact of TV. In addition to precise targeting, the brand could track online conversions from users who were served an OTT/CTV ad on any device.

After establishing their target audience of more than 18 million homes, Simpli.fi’s Addressable Geo-Fencing solution used GPS data paired with plat lines to match each address to the exact physical location, shape, and size of the property. The system then automatically built a target fence around each property for targeting the individual households with OTT/CTV ads across desktop, tablet, and mobile devices.

In order to mirror their traditional TV campaigns, the advertiser provided a list of publishers on which they wanted to run ads. Simpli.fi leveraged Private Marketplace Deals (PMPs) to access premium inventory and ensure the brand’s OTT/CTV ads appeared on relevant and brand-safe content. Cross-device matching not only allowed the advertiser to target users on every device they use for streaming TV content – it also enabled the tracking of online conversions. Simpli.fi’s cross-device graph identified every device associated with the same individual, including desktops, smartphones, tablets, and OTT/CTV devices. This meant that Simpli.fi could report on individuals who were served an OTT/CTV ad and then scheduled a consultation appointment.

Simpli.fi’s OTT/CTV solution offers the ability to track either online or offline conversions from an OTT/CTV campaign. Advertisers can gauge ROI by measuring online conversions through their website via user actions such as purchases, form completes, chat widget interactions, and much more.

Overall, the advertiser’s first OTT/CTV campaign was a success, as they saw an increase in online appointment schedules directly attributed to the campaign. Additionally, the month-long flight measured a 95.8% Video Completion Rate. The ability to custom-curate an audience and serve ads at the household-level demonstrated how programmatic OTT/CTV campaigns with Simpli.fi achieve the impact of TV with the precision of digital. 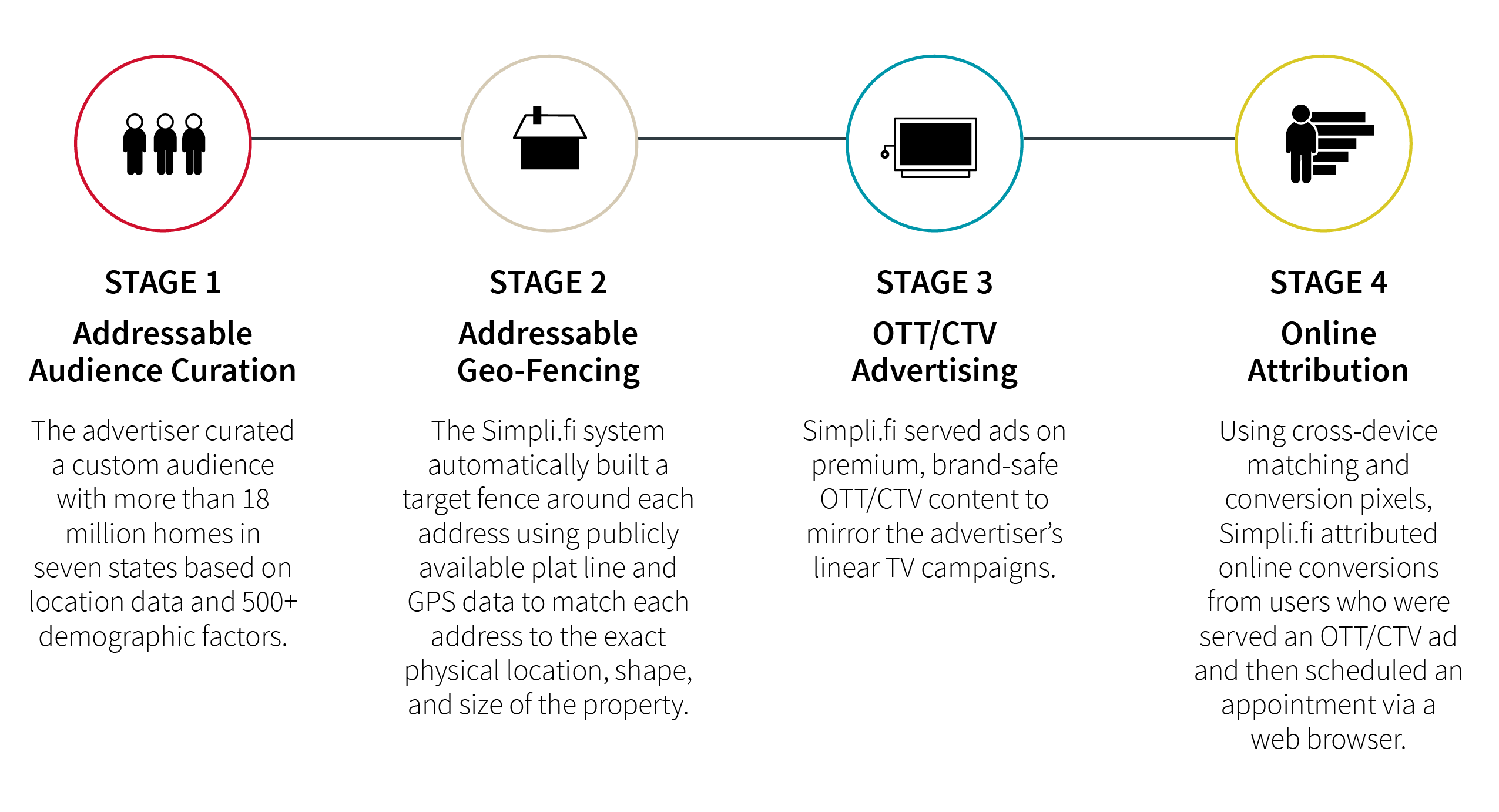 Interested in using Addressable OTT/CTV advertising for your video campaigns?
Get in touch at hi@simpli.fi, or contact your Simpli.fi representative.